“BLOCKCHAIN INTELLIGENCE represents tech SMEs as well as the legal-regulatory environment through its Blockchain Intelligence Law Institute” said Almudena de la Mata, CEO of Blockchain Intelligence. “We are the first Blockchain Technology training centre in Spain and Latin America and the first Think & Action Tank” notes de la Mata adding “our experience in project development and consultancy helps us in the generation of applied knowledge focused on SMEs”. “In Europe we focus our activity on international expansion, business and regulatory development as well as projects focused on sustainability. We are part of the European Blockchain Observatory and Forum and INATBA” continues de la Mata. 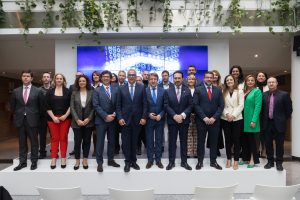 he Regional Minister for Local Administration and Digitalisation, Carlos Izquierdo, said “This agreement will make Madrid the nerve centre for connecting nodes of this technology between the American continent and Europe”, said Izquierdo, who also described the main functions that the Tres Cantos centre will have, including carrying out research, studies, analysis and projects on blockchain, as well as promoting its knowledge and use by society, in addition to promoting the establishment and adoption of digital identity models.
“From the regional government we promote public-private collaboration in all areas and we defend and support entrepreneurs who create jobs, wealth and prosperity, whose work has been especially difficult during the pandemic”, emphasised Izquierdo, and then recalled that the region accounts for a third of all Information and Communication Technology companies in the country and 64% of all investment in the sector.

Collaboration between Blockchain Intelligence and the public administration has been a core activity of the centre, which has participated in the development of strategic studies and training in the sector.

This website uses cookies to improve your experience while you navigate through the website. Out of these cookies, the cookies that are categorized as necessary are stored on your browser as they are essential for the working of basic functionalities of the website. We also use third-party cookies that help us analyze and understand how you use this website. These cookies will be stored in your browser only with your consent. You also have the option to opt-out of these cookies. But opting out of some of these cookies may have an effect on your browsing experience.
Necessary Always Enabled
Necessary cookies are absolutely essential for the website to function properly. This category only includes cookies that ensures basic functionalities and security features of the website. These cookies do not store any personal information.
Non-necessary
Any cookies that may not be particularly necessary for the website to function and is used specifically to collect user personal data via analytics, ads, other embedded contents are termed as non-necessary cookies. It is mandatory to procure user consent prior to running these cookies on your website.
SAVE & ACCEPT