Presentación libro “Cryptoregulation in a Nutshell” 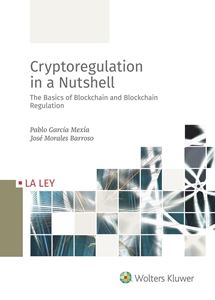 Blockchain and Distributed Ledger Technologies (DLTs) are one of the most disruptive digital technologies for Humankind. This is the case in the financial field, since DLTs embody the technological engine of a cryptocurrency of notorious success, Bitcoin. Blockchain, however, is much more than Fintech, its possible uses being manifold already today.

“Blockchain runs over the Internet”, and in fact, it works like the other protocols built on the “application” layer of the Internet, for example the World Wide Web (WWW). When invented in 1989, also the WWW was only “one more protocol”, which joined the pre-existing email, among others. By 1995, the WWW had revolutionized the Internet and was largely responsible for its massive social emergence. Nothing should prevent Blockchain, also “just another protocol”, from generating similar results.

This is what we believe, the authors of this work, which tries to condense the key technological aspects of Blockchain, together with the main challenges and contents of its legal regulation, while at the same time, in a very synthetic way, provide answers to the many doubts that this promising technology has raised in the legal and regulatory field.

This website uses cookies to improve your experience while you navigate through the website. Out of these cookies, the cookies that are categorized as necessary are stored on your browser as they are essential for the working of basic functionalities of the website. We also use third-party cookies that help us analyze and understand how you use this website. These cookies will be stored in your browser only with your consent. You also have the option to opt-out of these cookies. But opting out of some of these cookies may have an effect on your browsing experience.
Necessary Siempre activado
Necessary cookies are absolutely essential for the website to function properly. This category only includes cookies that ensures basic functionalities and security features of the website. These cookies do not store any personal information.
Non-necessary
Any cookies that may not be particularly necessary for the website to function and is used specifically to collect user personal data via analytics, ads, other embedded contents are termed as non-necessary cookies. It is mandatory to procure user consent prior to running these cookies on your website.
GUARDAR Y ACEPTAR